CD: Ron, thank you for taking the time to speak with me today about Lyman W.  Keele, Jr. and the events surrounding his death after the April 4, 1977 crash of Southern Airways Flight 242. You worked together at Southern, and you were both reservists at Dobbins Air Force Base in Marietta, GA. But first, please describe how you became an A-7 attack pilot aboard the USS Oriskany in the final months of the Vietnam War.

RC:  “I finished four years at Auburn in August of 1968, and the day I graduated I took a bus to Pensacola, Florida. So I graduated on Saturday, and by Monday I had started flight school in Pensacola. It took me six weeks to finish my primary training on T-34’s at Saufley Field – these are now historic airplanes (laughs) – and then I went up to Meridian, Mississippi for basic jets, which were straight wing T-2’s. After that I went to gunnery school back in Pensacola, and from there I moved on to advanced jets in Beeville, Texas, flying F-9’s. I got my wings in August of 1969, and I became a flight instructor flying F-9’s and T-4’s out of Beeville and Kingsville for the next 30 months.”

“In September of 1971 I was transferred to Lemoore, California, to what was then called the Replacement Air Group, or RAG. You started with instruments school for about three months, and then they moved you into your type rated aircraft, which in my case was the A-7. There we learned all of the weapon delivery systems, air-to-air refueling, and carrier landings. Finally, in early May of 1972, I became fully qualified as an A-7 driver, and I was assigned to Squadron VA-215 aboard the USS Oriskany.”

“Things happened pretty quickly after that. Operation Linebacker began on May 10, 1972, just after the North Vietnamese invaded South Vietnam. We quickly sortied out of San Francisco, and spent eight or nine days crossing the Pacific, stopping in Hawaii, Guam, and the Philippines. We went online sometime in late May, and then transitioned into combat flying at Dixie Station down south in the Gulf of Tonkin. We did that for probably two weeks, and then we went up north to Yankee Station and worked up there for the next nine months. A normal line period was between 38-42 days long. You stayed at sea, and then you went into port for three to five days, and then back for another line period. I flew a total of 147 missions during the war in Vietnam, and most of that was up north.”

First Responders searching for survivors after the crash on April 4, 1977

CD:  How did you first meet Lyman Keele, Jr.?

“So several us decided that it’s time to get out of the United States Navy and join the civilian world. I got hired by Southern Airways on June 4, 1973 while I was still on active duty in the Navy with 90 days of leave on the books. I made it official after a flight with Southern down to Albany, GA. During my three hour turnaround, I took a cab out to the Naval Air Station in my Southern uniform, and just checked out of the Navy.”

“Five months later I was furloughed during the recession of 1973, but Southern hired me right back into management. I still needed to fly, so I joined the Naval Reserve out of Dobbins Air Force Base in October of 1973. I joined Squadron VA-205, which consisted of 22 pilots. Seven of them were from Delta, seven were from Eastern, six were Southern pilots, one was an American pilot, and the last one was a banker. One of those Southern pilots was a guy named Lyman Keele, Jr. – and we immediately hit it off.”

“At that time we were flying single seat A-4’s. We had those for about a year, and then the squadron transitioned to the single seat A-7. Since I had over 1000 hours of flight time in the A-7, I became one of the instructors. Now to instruct in an A-7, the instructor gets into the lead airplane and the student gets into the number two airplane, and he flies your wing from takeoff to landing – we call it a ‘tail chase.’ And so on Lyman’s first flight in an A-7 we take off from Dobbins and we fly to the snowbird operating area up in North Georgia, way up in the mountains. The highest point up there is Brasstown, at about 5,000 feet of elevation.”

“So Lyman decides that after 25 minutes of flying time he’s had enough instruction and he wants to fight. So we back off about 5 miles and make a head on pass. Your closure speed is about 1,000 knots, and the fight starts when you’re wingtip to wingtip. And of course, the first time around when we started pulling he didn’t know the G limitations, so he immediately departs from flight and starts spinning at about 20,000 feet. We’d already agreed that if he entered uncontrolled flight the floor would be at 10,000 feet, and he would eject. So he goes through 10,000 feet, and I’m following him around, and he’s still out of control. I tell him to eject, and he will not eject.”

“And so we get down to about 6,000 feet, and I’m yelling and screaming at him, and he finally recovers right above the trees and climbs back up to altitude. I tell him to get back to tail chasing, and he says, “No, we’re going to fight again.” So he makes another high speed pass, nose to nose, and the same exact thing happens. As he was climbing out the second time around, I told him we were going back to Dobbins because I didn’t want to be part of an accident investigation. So back to Dobbins we went.”

“After that, we became pretty much best friends, and spent a lot of time in the Reserve flying together. We were also first officers at Southern – he was flying the DC-9, and I was furloughed. I flew A-7’s in the Reserve during the entire time I was furloughed, which was about four years, and then for about a year after that. I really enjoyed it.”

CD:  What were your duties at Southern?

RC:  “During the time I was furloughed as a pilot I worked in several different positions, but I ended up in crew scheduling. I had worked the morning shift on April 4, 1977, and I got off at about 4 o’clock in the afternoon. Lyman was flying on that particular day. He lived in Atlanta but was based in New Orleans, and so he commuted back and forth. His last leg on April 4th was on Flight 242 out of Huntsville, Alabama going to Atlanta, and from Atlanta that flight would have continued on to New Orleans. There, he would have gotten off the airplane and boarded another Southern flight back to Atlanta. He would have gotten home at about eight o’clock that night. Well, Southern 242 left Huntsville and flew into a line of thunderstorms. The rest, as they say, is history.”

CD: Where were you when you first heard that Flight 242 had crashed? 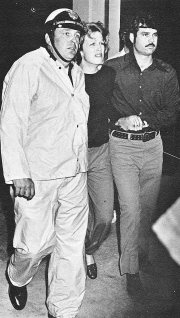 RC: “I was driving home from work and listening to the radio. They came on with a special report that an airplane had crashed in the vicinity of New Hope, GA. Well, then the report came in that it was a DC-9, and then they said that it was a Southern Airways DC-9, and that really narrowed things down. So I pulled into my complex, went right into my apartment and got on the phone (we didn’t have cell phones back then) and I called crew scheduling. My relief was also a Navy pilot. I said, “Was that Southern Flight 242?” And he says, “I can’t give any information out.” I said, “Hef, it’s me.” And he says, “I got too many people standing around me. I can’t give out any information.” I said, “Just say yes or no – was that 242?” He says “Yes.” “Was Lyman on that flight?” He says “Yes.” “Do you know anything about it?” He says “No.”

“At that point I got back into my car and drove the 20 minutes over to Lyman’s house. I walked up to the house and knocked on the door. Cathy opened the door, and as soon as she saw me she knew what happened and fainted dead away. I had to pick her up, and then of course the girls started crying. A few minutes later Sid Cook came over. By then we knew there were multiple casualties, but we also heard that the first officer was being transported by helicopter to Kennestone Hospital. So we jumped in the car – I was in the back seat with Cathy, Sid’s wife was in the front, and we drove straight there. All the reports started coming in, and it’s looking pretty bad. After we got there, we met with a hospital official who told us that Lyman had died en route. Cathy just fell to pieces.”

“Then they said they needed someone to identify the body. I’m with Cathy, and so I look at Sid who had flown with him and knew him, and he said he would go in and check. And then he went in and identified Lyman’s body.”

“I can’t remember what time we got back to Cathy’s house that night, and I can’t remember how late I stayed there, but I think it was pretty late. And so the next day I get a call from a Navy flight surgeon I know. He said that he had just gotten a call from the city morgue at Grady Hospital in Atlanta. They had misplaced Lyman’s paperwork, and they needed someone to come down and identify the body…again.”

“I had done that in the past – but not Lyman. So we went to Grady, and the coroner came out to meet us. I asked him if it was bad, and he said no, it really wasn’t that bad. And so while my friend looked at the autopsy report, I went in to identify him. And really, the only obvious injury was to his nose. He also had a cut above his right ear, probably 4 inches long, but not too deep. And he had bruises on his right side.”

“A few days later we all flew out and buried Lyman in San Pedro, California, and it was a sad event. You know, he was the third Navy pilot that I’ve had to bury during my lifetime. I’ll tell you this – flying is a tough profession.”