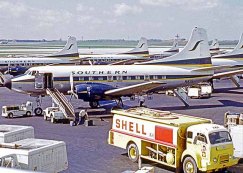 The National Transportation Safety Board is iconic. Everyone recognizes their intrepid investigators, clad in navy blue shirts emblazoned with the yellow “NTSB” logo, swarming all over the smoldering wreckage of airplanes, ships, and trains. Established in 1967, the Board is mandated by the U. S. Government to conduct independent investigations into every type of accident on land, air, and sea. Their final recommendations often result in significant changes to the existing transportation safety regulations.

In 1977, the NTSB investigated and issued findings on a multitude of commercial aircraft crashes in the United States. One of their investigations involved the crash of Southern Airways Flight 242 in New Hope, Georgia on April 4, 1977. They fully documented the accident scene, examining everything from the recovered cockpit voice recorder to the severely damaged engines to the performance of the flight crew. Their final report was issued on January 26, 1978, and included the following majority opinion:

“The National Transportation Safety Board determines that the probable cause of this accident was the total and unique loss of thrust from both engines while the aircraft was penetrating an area of severe thunderstorms. The loss of thrust was caused by the ingestion of massive amounts of water and hail which in combination with thrust lever movement induced severe stalling in and major damage to the engine compressors.”

“Major contributing factors included the failure of the company’s dispatching system to provide the flight crew with up-to-date severe weather data pertaining to the aircraft’s intended route of flight, the captain’s reliance on airborne weather radar for penetration of thunderstorm areas, and limitations in the Federal Aviation Administration’s air traffic control system which precluded the timely dissemination of real-time hazardous weather information to the flight crew.”

Francis McAdams was the only Safety Board member who dissented from the majority opinion. He submitted the following assessment:

“The National Transportation Safety Board determines that the probable cause of this accident involves the captain’s decision to penetrate rather than avoid an area of severe weather, the failure to obtain all of the available weather information despite having prior knowledge of the severity of the storm system, and the reliance upon airborne weather radar for penetration rather than avoidance of the storm system. The penetration resulted in a total loss of thrust from both engines due to the ingestion of massive amounts of water and hail which in combination with advanced throttle settings induced severe stalling in, and major damage to, the engine compressors, which prevented the crew from restarting the engines.”

“Furthermore, if the company’s dispatching system had provided the flight crew with timely severe weather information pertaining to the aircraft’s intended route of flight, it is possible that the severe weather would not have been penetrated.”

“Contributing to the cause were the inadequacies of the FAA’s air traffic control system which precluded the timely dissemination of real-time hazardous weather information to the flight crew.”

Directly after the crash in New Hope, the NTSB removed Flight 242’s engines to a secure hangar owned by Southern Airways in Atlanta, GA. After an investigation of the engine’s components, the Safety Board reported the following:

“The NTSB concludes that after rotational speed was first lost (due to the ingestion of large quantities of water), the throttles were advanced, and surging and stalling occurred which caused the blades in the low-pressure compressors to clash against the vanes. This conclusion is supported by the physical damage to the engines.”

“The Safety Board further concludes that the lack of typical foreign object damage, including hail damage from known encounters, to the fan blades and the blades in the forward stages of the low-pressure compressors clearly indicates that hail ingestion was not responsible for the compressor damage. Following the damage to the compressors and turbines the engines were no longer capable of producing thrust.”

The federal investigators also created a photographic record in the aftermath of the crash. The nine pictures posted below were taken by photographer Warren L. Bond, and they provide a powerful impact statement far more visceral than the descriptions contained in the written report. These images are hereby submitted for the public record.

The forced landing site on Highway 92 Spur. The volunteer fire station (with a pole-mounted siren) is the red building at the bottom. The remains of Newman’s Store are mid-photo. The aircraft’s final resting site is at the top.

The partial remains of instrument panel from Southern Airways Flight 242

The broken tail section. The separated right wing is in the foreground. 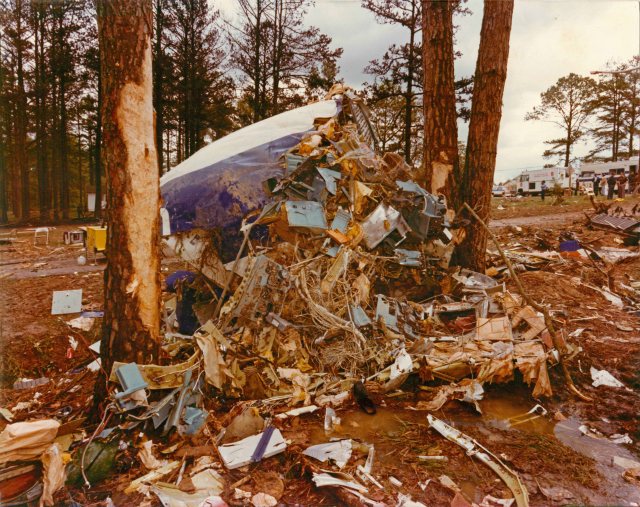 Side view of the mid-section of the fuselage and left engine. The tail section is in the background.

Side view of the right engine next to the fuselage

30 Responses to “Crash Site Confidential” – The NTSB Photographs Of Southern Airways Flight 242 – by Clifford B. Davids