It was late in the morning on April 4, 1977, when a jubilant Annette Snell returned to the building at 3614 Jackson Highway in Sheffield, Alabama.  She had spent the past week there recording her first album, and all of the guys at the Muscle Shoals Sound Studio assured her the new songs would power straight up the Billboard 100. She knew they could make it happen too –  they had done it a decade earlier with a singer named Aretha Franklin, helping her to become the undisputed queen of soul by jump starting her stalled career with monster hits like “Respect,” and the classic “(You Make Me Feel Like) A Natural Woman.”

She took one last look around, and then hurriedly left the studio with just enough time to grab her things before heading out to the Muscle Shoals Airport. The newly recorded songs were still ringing in her ears while she boarded Southern Airways Flight 242, reluctant to leave but glad to be returning home to New York City. She must have felt the long years of hard traveling as she climbed into the waiting DC-9 aircraft, hoping against all hope that she had finally locked in.

Snell was still young, but she had already been in the business for close to 15 years. She had come up in the early 1960’s, paying her dues amid the rough and tumble of the rhythm & blues scene in Miami, Florida. She started doing background vocals with the Mar-Vells, and then moved up as the lead female singer for The Fabulettes. But she craved more, and after moving to NYC in 1968, she made her way to Nashville, TN.

During the mid-1970’s, she recorded three well-received 45’s for Buddy Killen at his Soundshop Recording Studios in Nashville. Each song placed on the Billboard soul charts: “You Oughta Be Here With Me” (#19, 1973): “Get Your Thing Together” (#44, 1974); and “Just as Hooked As I’ve Been” (#71, 1974). The three songs cemented her hard earned reputation as a gutsy, emotional vocalist of uncommon passion and power. But she was still anxiously waiting for her first breakout hit… 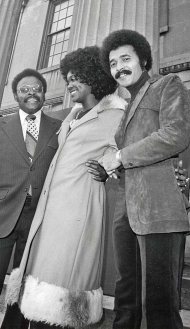 And then everything fell into place. Her producer and agent worked out a deal to have Epic Records release her first album. They arranged for recording time at the Muscle Shoals Sound Studio with their legendary house band known as “The Swampers” – the very guys who had helped resurrect Aretha Franklin. The band had also provided the unmistakable swagger for Wilson Pickett’s “Land of 1000 Dances,” the backbone for Percy Sledge’s “When a Man Loves a Woman,” and so many hits for so many other artists that it still seems improbable. Located along the Tennessee River in northwest Alabama, the hard-working recording studio stayed busy serving up their distinctive blend of country, soul, and R&B like a fine, single malt whiskey.

She boarded the flight that Monday afternoon with a deep sense of satisfaction – she was finally heading home. Southern 242 made its first stopover in Huntsville, AL, and then departed for Atlanta, GA. The plane ran into immediate trouble, losing both jet engines in a hellacious hail storm before it dropped from the sky. After the fiery crash in New Hope, GA, word quickly went out to all of Annette’s friends and family that she had been one of the 72 fatalities aboard the doomed aircraft. Her mother was beyond devastated.

The authorities were never able to identify her body, just a partial bridge that matched her dental records. Some family members were convinced that she had survived, certain that they had seen her on the evening news, dazed and wandering around the crash site. But they were sadly mistaken – she never walked away on that tragic afternoon.

There is one remaining mystery surrounding her death. It was rumored that she had carried the final recordings from MSSS onto the plane. They were the master tapes, and the songs represented her crowning achievement of passion, power, and perseverance. I can imagine her clutching onto those hard-earned reels as the aircraft made its final descent, praying for her family and loved ones, hoping that she might somehow survive the crash. But she did not survive, and the songs she carried with her – the songs that might have made her a star – were lost forever in the flames.

–Photographs courtesy of the Snell family–