“An Aerial View of the Southern Airways Flight 242 Crash Site in New Hope, GA” – by Clifford B. Davids 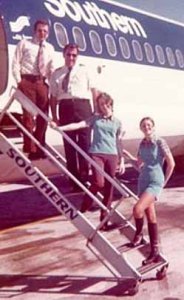 The intersection that marks the commercial heart of New Hope, GA looks perfectly unremarkable – at first. You can get an old fashioned shave at Pete’s Barbershop before picking up a few groceries down the street at Publix, or perhaps enjoy the cowboy stew at Rodney’s BBQ after a tough day at work. On Sunday morning you can attend services at the New Hope First Baptist Church, which stands across the street from the Civil War era cemetery. I traveled there recently, hoping to find the location of the old Southern 242 crash site, the worst aviation disaster in the history of the state of Georgia. But after driving up and down the main drag, I couldn’t find a thing.

So I parked in front of the New Hope Martial Arts School just north of the intersection on Dallas-Acworth Highway. I got out and looked up and down the road, but there weren’t any markers or signs. I returned to my car and decided to drive back to the old graveyard – cemeteries have always been an ideal place to begin and finish a journey. As I wandered among the Confederate gravestones and sunken granite markers my cell phone rang, the skies cleared, and my odyssey began.

It was Hugh Walters, my local contact and venerable guide. Hugh is one of the old guard, an unaffiliated Paulding County historian with a rebel mustache and deep roots in the New Hope community. He is a member of the local Sons of Confederate Veterans, and he also belongs to New Hope Memorial Flight 242, Inc., the organization tasked with raising funds for a Southern 242 crash memorial. He had been observing me from the vantage of the church parking lot, and when I looked up he waved for me to come over.

After shaking his hand, I asked him where everything was. He looked at me with genuine amusement, and explained that we were standing smack on the spot where Flight 242 had first touched pavement on April 4, 1977 in a desperate attempt at a forced landing. He told me we were also standing in the middle of the historic New Hope Church battlefield. Back in May of 1864, General William T. Sherman came to know this area quite well, having encountered fierce resistance and heavy casualties on his way to torching Atlanta.

I looked around again. I was standing at the same intersection, but this time I saw the final approach that Southern Airways Flight 242 had taken just before it crashed and burned. Located directly behind me were the crumbling but still visible entrenchments from that bloody two-day battle in 1864. Unbelievably, the remains still ran straight past the old church and beyond to the graveyard. Everything was right here. 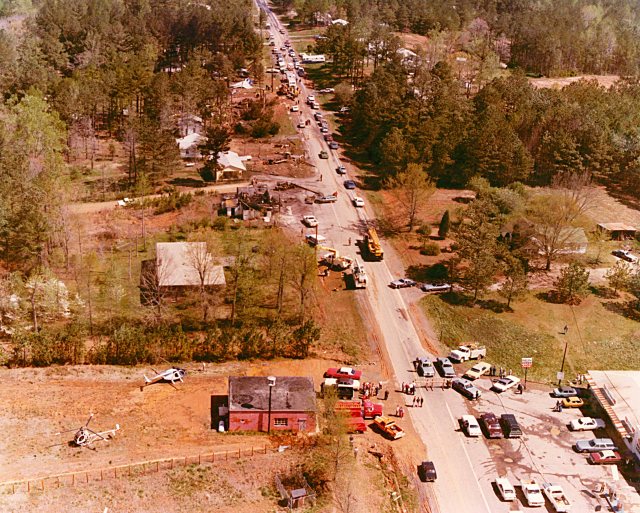 The forced landing site on Highway 92 Spur. The volunteer fire station (with a pole-mounted siren) is the red building at the bottom. The remains of Newman’s Store are mid-photo. The aircraft’s final resting spot is at the top.

I needed to find a way to fit the pieces of this complex puzzle together, so I started with the National Transportation Safety Board’s Southern Airways Flight 242 accident report. The final report, dated January 26, 1978, describes the forced landing as follows:

The aircraft’s outboard left wing section first contacted two trees near State Spur Highway 92 (now Dallas-Acworth Highway) south south-west within the community of New Hope. The left and right wings continued to strike trees and utility poles on both sides of the highway, and 570 feet after striking the first tree in New Hope, the aircraft’s left main gear contacted the highway to the left of the center line. Almost simultaneously, the outer structure of the left wing struck an embankment, and the aircraft veered to the left and off the highway. The aircraft traveled another 1,260 feet before it came to a rest. As it traveled, the aircraft struck road signs, utility poles, fences, trees, shrubs, gasoline pumps at a gas station-store, 5 automobiles, and a truck. The total wreckage area was about 1,900 ft. long and 295 ft. wide.  (Sec. 1.12) Wreckage and Impact Information

The dry language doesn’t even begin to describe the horrible toll of the 72 people killed in that tragic crash – of the hauntingly silent descent of Southern 242 after both jet engines flamed out – of the co-pilot’s frenzied search for a suitable runway to land the stricken aircraft – or of the rural community unlucky enough to get caught between a powerfully destructive force and its final destination…for the second time. 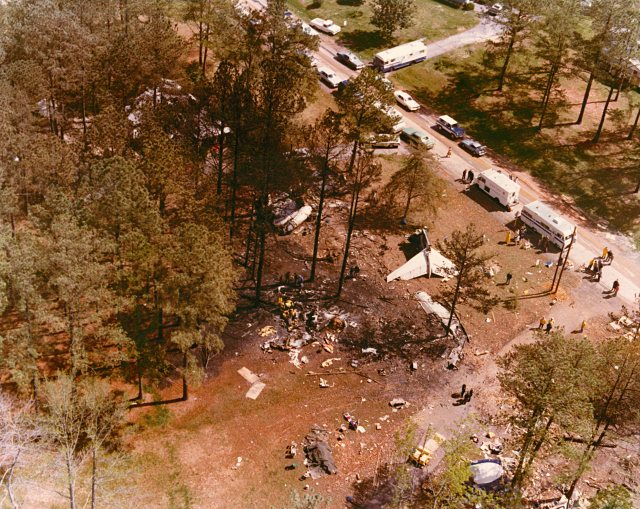 Aerial view of the remains of Southern Airways Flight 242.

40 Responses to “An Aerial View of the Southern Airways Flight 242 Crash Site in New Hope, GA” – by Clifford B. Davids