“The Battle of New Hope Church and the Tragic Crash of Southern Airways Flight 242” – by Clifford B. Davids 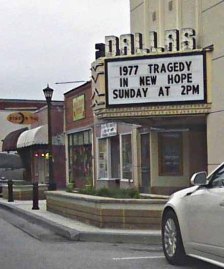 The rural community of New Hope, Georgia has been the unwitting victim of catastrophic mayhem twice in the past. In 1864, it was caught directly in the path of Gen. William Tecumseh Sherman as he pitched and fought his way from Chattanooga, TN to Atlanta, GA. The ensuing battle at New Hope Church cost both sides over 2,000 total casualties.

More than 11 decades later, New Hope was also the site of the worst aviation disaster in the history of the state of Georgia – a fiery plane crash on the afternoon of April 4, 1977 that claimed a total of 72 lives. Many of the witnesses described how the flaming debris from Southern Airways Flight 242 was strewn across the old battlefield, once again drenching the community in blood.

The aftermath of the crash was documented by the news reporters, accident investigators and photographers of the day. And if you look closely, the scars from both events are still evident in the red clay soil of its rolling hills, as well as in the memories of the people who grew up there. But regardless of the historic violence visited upon this small community, New Hope remains a quiet and peaceful shelter for those who live there.

Located about 38 miles northwest of Atlanta, New Hope has generally avoided the brunt of development – but they all know change is inevitable. The area has seen a huge influx of families fleeing from the noise and congestion of the big city, seeking to live in a naturally beautiful location that boasts friendly faces and a slower pace. But the old timers want to make sure that the newer residents learn to appreciate its storied but tragic past.

I recently paid a visit to Dallas, Georgia, just down the road from New Hope. The local coffee shop, normally closed on Sunday, was open for business that day to serve the crowd that showed up for the Southern Airways Flight 242 memorial service at the local cinema. After the speakers were done and the Girl Scouts had honored each of the victims with a white carnation, the organizers dimmed the lights for the main event: a vivid dramatization of the plane crash, produced by the National Geographic Channel in 2007 to mark its 30th anniversary.

Another highlight that afternoon was the special appearance of Catherine Lemoine Cooper, one of the two flight attendants who survived that harrowing day in April of 1977. Still trim and attractive, she currently works full time for Delta Airlines as a senior flight attendant. After the service, she was surrounded by well-wishers at the coffee shop when I overheard her mention that she was jetting off the following week to meet an old friend at one of their favorite restaurants in Germany. A survivor indeed.

But what about this community, and the historic events that have unfolded there? How does one measure the effect of those two tragic events which occurred over 100 years apart? And how do you define a community growing so rapidly that many of its residents are unaware that anything of note ever happened in New Hope? These are some of the questions I will try to answer in the months ahead. Stay tuned.

6 Responses to “The Battle of New Hope Church and the Tragic Crash of Southern Airways Flight 242” – by Clifford B. Davids