“The Daughter of Southern Airways Flight 242’s First Officer Finally Speaks Out” – by Clifford B. Davids 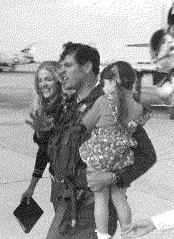 Lyman W. Keele, Jr. was a natural born aviator. After graduating from the University of Nevada, Reno in 1966, he joined the U. S. Navy and received his flight training at the Naval Air Station Pensacola in Florida. He was assigned to the carrier USS Hancock, and he flew over 100 combat missions during the war in Vietnam. He also provided air support for both ground combat forces and troop rescue operations. Keele earned numerous bronze and gold Air Medals for his prowess, as well as a Navy Commendation Medal for “heroic achievement as a pilot of jet aircraft while attached to Attack Squadron 212 aboard the USS Hancock.” The man could flat-out fly an airplane.

Keele left the Navy in 1973 and joined Southern Airways, a regional airline operating out of Atlanta, GA. On April 4, 1977, he was the first officer and pilot at the controls aboard Southern Airways Flight 242 when it lost both engines in a hail storm and went down in New Hope, GA – a total of 72 people were killed in that tragic accident. Although he survived the crash, he died while being air-lifted to the nearby Kennestone Hospital in Marietta, GA. Lyman was only 34 years old when he was buried a few days later in San Pedro, CA. He was survived by his wife Cathleen and their two daughters; 7-year-old Tiffany, and 2-year-old Monica.

Several months after I started this oral history project I was contacted by a man named Thad Morrison. Ten years earlier he had been involved in planning a memorial to the crash victims, and he offered to share some of his research with me. I drove out to his rambling farm house just outside of New Hope, and he gave me a box full of items which included NTSB crash site maps, numerous eyewitness accounts, and his correspondence with Keele’s daughter Tiffany. Their exchange was insightful.

She wrote about her parents, describing how they first met on Catalina Island when they were both young teengers. They dated throughout high school and college, and were then married just before Keele joined the Navy. The young family moved around from base to base during the early years. Her father did two tours in Vietnam, and Tiffany recalled that her mother suffered from splitting migraine headaches because of her concern for his safety. She also wrote that her dad was a “life of the party kind of guy,” who loved to surf the California waves and ride horses when he wasn’t in the cockpit.

I decided to drop her a line, and she responded immediately. She wanted to know how to help with raising funds for a much needed monument at the Southern 242 crash site, so I asked her to write an letter to the New Hope community about her life after the crash. She e-mailed her response to me the next day, and I present it here in its entirety.

The remnants of the still smoldering tail section

“YOUR DAD WENT TO FLY PLANES IN HEAVEN…”

I will never forget those eight words. It was what the pastor’s wife told me on that windy and rainy night when I was sent to stay at our neighbor’s house because my mom had to leave so quickly….I don’t really remember seeing my mom for a while after she left that night. I do remember I went to school the next day. It was an odd day because I was no longer just Tiffany – I was the girl whose father had just died.

Kids kept coming up to me asking if it was true. “Your dad died in a plane crash, and he was flying the plane?”

“Well he was the one flying the plane, so whose fault was it?” they asked.

So – at seven years old it was a bit easier to just drop that subject. It’s what families and adults did back in the 1970’s when they dealt with death. Thank goodness that’s not the case now. Now we use special words that help young children move on and process their grief. I wish someone had used some of those special words with me back then.

I waited every day for years for my dad to come back from the airport after his “layover” (that’s what he called it when he was gone). He would take me to McDonalds at 8 A.M. to get a cheeseburger because his days and nights were flipped. I cherish those moments. I hold on to every memory and every photo I can get my hands on. I remember him flying over our house in a small plane he rented for the day–I waited in the driveway all morning for him to do the flyover. I also remember once he flew us in a seaplane to Catalina, the small island off the coast of Southern California, because that was the place where my parents first met.

His father was also an aviator. My grandfather was a pilot for TWA–back when flying was done in style. He was tragically killed in a helicopter accident in Texas. My dad used to proclaim, “All of the Keeles get a pilot’s license issued with their birth certificate!”

Back in high school my dad and his brother Ken would fly to NYC or Paris for 3 days because the flight was as exciting as the destination itself. They took every moment they could to go up in the air. He always told us how safe air travel was and that sixty planes take off and land every second.

The irony about the Southern Airways crash was that my mother was always extremely worried about Lyman and his combat tours in Vietnam. The tours were always very stressful for her—it was the constant thought of him being taken prisoner or blown out of the sky. I remember he tried to reassure her by saying, “I have it easy–the Marines are on the ground getting shot at, I’m just up in the sky doing my thing–and I do it well!”

Landing a fighter plane on an aircraft carrier (my dad was on the USS Hancock) is one of the hardest things to do in aviation–tougher than being in a dogfight with another plane. So after the war was over, my mom told me she was relieved and thrilled that my dad was flying with a commercial airline–how ironic! Flying was always his first love, and now it had become his day job….so life was good.

All of my Dad’s friends told me he was the most talented pilot they knew – and coming from his peers (who were also pilots) that meant a lot. I didn’t know much about the crash until about three years ago, and that was also when I started to process my grief. How can that be that it took me so long?

Well, if you stuff it down for 30 years, at some point it will bubble back up. I saw a movie with a “father/daughter” theme in 1998, and I became hysterical, inconsolable, intensely crying, and in a complete fit because it hit so close to home. I knew at the time that I should address my grief, but I just wasn’t able to do it.

I remember my mom asking me when I was headed off to USC if I needed some grief counseling because that is what people did in those days, and I said, “NO. I’m fine–its been 10 years…” She apologized for not getting me counseling when I was younger, but it just wasn’t done then.

It was when my oldest son Trent Lyman wanted to know about his grandfather and namesake that I decided to read a few articles about Flight 242. I learned that there were four “on the ground” errors that lead to the crash:

(1) There was no up to the minute weather service via fax–Delta and Eastern had that but not Southern; (2) The phone line into the back up weather service was busy, so they made a judgment call to send up Flight 242; (3) The loss of both engines was unprecedented, so they told the pilots to throttle up–NOT to throttle down. Throttling down would have cleared out the hail and allowed a restart; and (4) They were not given a vector for a safe place to land by the air traffic controller–and there WAS a vector within the distance they were able to coast the plane once they lost the engines. 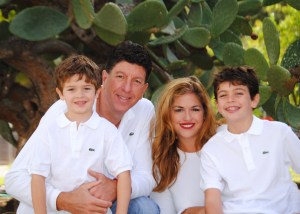 So on the afternoon of April 4, 1977, during two record storms, my dad’s plane crashed on that highway in New Hope, GA, and changed that community forever.

In April of 2011 I finally got some grief counseling. I finally realized that I had never cried about the loss of my father until I was sitting in a therapist’s office. Yep, over 30 years and I never shed one tear. When a parent dies, the appropriate word to use with children is either death or died or dead–to say “passed away” isn’t final and doesn’t help the child to adjust. Grief for kids five to eight years old manifests itself in denial–I only heard, “Your dad went to fly planes in heaven…” My seven-year-old self waited quite a while for him to return so we could go to McDonalds for that cheeseburger.

To this day my charity affiliation is with Grief Counseling. I am involved with Camp Erin–a camp where kids who have lost a parent or sibling can go for a weekend of fun and healing. Grief shapes people, and I must admit it shaped me. Until I got the help I needed, I was a little colder, a little more aloof, and a little more distant from everyone.

I was always very uncomfortable when any type of plane crash made the headlines. I would even take the day off from work—I was never at ease with the topic. The way we handle and deal with grief today has changed, and I sincerely pray that the people of the New Hope community and Paulding County were able to process their own grief and also move forward.

I am certain my dad used the best tools he had available at the time to safely land that plane and avoid injuring those on the ground. He was a skilled pilot, talented and precise. I am so sorry for the impact the crash had on your community.

I just want to say thank you to everybody there – thank you for pulling together that day, and for doing such an amazing job afterwards. I know my dad thanks you too.

Rep. Newt Gingrich meets with Cathleen Keele and her daughters (L-R) Monica and Tiffany in May of 1979. Cathleen was in D.C. to accept an award for heroism from the Air Lines Pilot Assn. on behalf of her husband.

27 Responses to “The Daughter of Southern Airways Flight 242’s First Officer Finally Speaks Out” – by Clifford B. Davids