“From the Bricks of Ben Lippen to the Friday Night Drums” – The Evolution of Pritchard Park in Asheville, North Carolina – by Clifford B. Davids

On any given Friday night in downtown Asheville, N.C. you can hear the rolling sounds of congas, tom toms, and bongos echoing through the streets. Long-time residents or frequent visitors to the city know the sound to be the Friday Night Drum Circle at Pritchard Park, a tiny triangle of land wedged into the heart of the city. The drum circle has become an integral part of the city’s vibrant scene.

On its most energetic nights, hundreds of people pack into it’s mini-amphitheater, watching the drummers jam with each other while the dancers whirl and twirl about in a multitude of styles and dress (or at times, undress). It’s a symbolic community retreat, a weekly neighborhood gathering where you can jump in and participate, or just stand back and quietly observe.

As the weekend progresses, different churches will set up impromptu worship services on Saturday night, or perhaps on a Sunday morning. By Monday, the park becomes a haven for workers in the surrounding banks and law offices. When the weather permits, you can choose from a variety of shady trees to sit under for the perfect lunch spot. The six chess tables along the periphery stay busy, including players from the homeless shelter at the Western Carolina Rescue Ministry, just a few blocks away on Patton Avenue.

But ask any of the park’s visitors – the drummers and dancers, the worshipers and preachers, the business men, the lawyers, or the homeless – and they are unlikely to know that the park was created after a series of unlikely events transpired during the height of the Great Depression. Those improbable events involved two prominent evangelical preachers, a holy ground located high above the city, and the long forgotten demolition, and later revival, of an iconic Asheville building.

In 1903, after years of saving souls on the streets of Asheville, the 31 year old Rev. Lucius Bunyan Compton created his master-work four miles west of that small mountain town he knew so intimately. The Eliada Orphanage, which started out with 9 infants, provided a home for those unfortunate children born out of wedlock. But the property also served as a cornerstone of the early 20th century’s evangelical movement.

Compton’s week long camp meetings at the foot of the mountain above his beloved orphanage brought believers from near and far, and the guest speakers were the luminaries of the movement from across the nation, names that have now been mostly forgotten. One of his brothers in these endeavors was the Reverend Robert C. McQuilkin, President of Columbia Bible College in Columbia, S.C. McQuilkin’s idea of holding inter-denominational conferences found a champion in Compton, who by 1921 had completed a 2,000 seat tabernacle on the mountain plateau above his orphanage.

Compton dreamed that the Eliada Tabernacle would become a place of worship for the entire country. In a letter to McQuilkin in the spring of 1923 he offered up the property, along with it’s accompanying dormitory, kitchen and dining hall, for his use. McQuilkin accepted, and in fact, his conferences at Eliada became annual occurrences between 1923 and 1931, alongside his own camp meetings.

By the end of the decade, McQuilkin felt the need to build a dedicated conference center to his Victorious Life Movement, but with the country falling into desperate times, funds were limited. He appealed to his friends and followers to pray for a resolution to this dilemma. How the president of Columbia Bible College came to build his Conference Inn during the throes of the Great Depression was, to him and his followers, an answered prayer. To others, its very construction was just short of miraculous.

Standing room only at the Eliada Tabernacle during a sunrise service (Photo ca. 1921)

In an effort to spurn economic development during the Depression, the U.S. government granted federal land to cities and municipalities. Asheville was the recipient of one of these land grants: the old post office building, and the small triangle of land it sat on bounded by College Street, Patton Avenue, and Haywood Street, could belong to the city, provided that they demolish the old building promptly.

Time was of the essence in this deal. By November 1931, the city had numerous companies bidding to remove the building. But Asheville had offered the contract to the Columbia Bible College. McQuilkin wrote to his many followers about this “startling opportunity,” and then requested that they join him in “prayer of real faith…that will multiply a thousand fold, on home and on foreign field.”

At a removal cost of about $3,000, the Bible College could obtain close to $10,000 (approximately $150,000 today) worth of materials, allowing McQuilkin to build a brick conference center for the same price as a frame building. The Conference Inn, if he could build it, would dwarf Compton’s in size, structural solidity, and amenities. Unfortunately, the Board of Directors was not willing to borrow the money to take advantage of the offer. McQuilkin again asked for prayers from his followers. 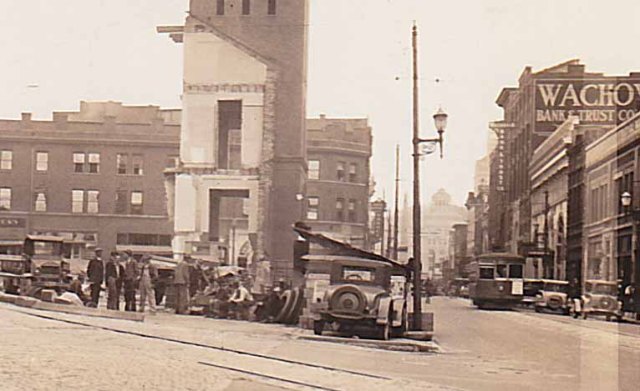 The back of this photograph states, “The last of the old post office, Asheville, North Carolina, in the spring of 1932.” The trolley is heading straight up Patton Avenue towards Vance Monument and City Hall.

Through the month of December, the College collected donations and pledges, in addition to a concession from the City of Asheville of $500 cash toward the building’s demolition. The City was ready to strike a deal with the CBC. But on January 2, 1932, disaster struck. On that day, a Palmetto State spokesperson announced that a group of 40 banks had failed, calling it the “worst disaster to have come to South Carolina since the Civil War.” The bank which held the Bible College funds had folded. The money was gone.

On the Tuesday following the failure, McQuilkin asked the City of Asheville for an extension in order to secure new financing. City officials said the contract had to be signed by Thursday. The deal appeared to be on the rocks.

He asked his followers, “Is God’s plan to be interrupted, or were we mistaken about the post-office building?” Financial provisions were made, gifts poured in both big and small, and a “gracious second giving” was offered up at the eleventh hour.

McQuilkin closed the deal on time, and within one month the contractor F.W. Bordner began to demolish the building. They transported all of the construction materials to a site four miles west at the top of Dryman Mountain, right next to the Eliada Tabernacle. The magnificent Conference Inn opened its doors later that year.

In the years after the post office’s removal, the odd triangle of land was subject to much debate and discussion. Though the area had been designated as permanent city property, the small dimensions of the parcel made it difficult to decide on its ultimate utility.

Following the demolition, the area was rather sparse. It took decades for a fountain proposed by Biltmore Estate landscape architect C.D. Beadle to be built. A scattering of benches would eventually become the school-bus stop. Later, a bus shelter installed in 1980 attracted a mostly unwanted clientele, and the park was dubbed the “Wino Hilton” for the increasing numbers of homeless who gathered there.

In 1989 the city’s Downtown Commission proposed a revitalization plan, which included moving the bus station several blocks away, once again freeing up that pocket-sized triangle of property. That last act began the metamorphosis that changed Pritchard Park from an afterthought into what is now the crown jewel of downtown Asheville.

The Conference Inn after the devastating fire on December 12, 1980

But as Pritchard Park was slowly evolving, so too was McQuilkin’s Conference Inn. And while the character of the current park was beginning to take shape by the late 1980s, the fortunes of the Inn would ultimately follow an opposite trajectory.

Back in 1940 the Ben Lippen School was established on the Conference Inn grounds as a school for missionary children, and the Inn served as a dorm for its male students. The building’s main claim to fame occurred in 1945, when it served as the location for the first meeting between Billy Graham and his future musical director Cliff Barrows. Thirty-five years later, Mr. Barrow’s son William would return the favor by accidentally setting the Inn on fire and destroying it – the Asheville Post Office would finally met its fate.

And while Ben Lippen remained a highly regarded Christian school, its remote location continued to be problematic. Columbia Bible College eventually changed its name to Columbia International University (CIU) as it continued to grow in size and prominence. Finally, while the Asheville City Council pondered the uncertain future of Pritchard Park, CIU decided to relocate the school back home to its Columbia campus, thereby ending it’s decades long ties with Eliada Orphanage and the city of Asheville.

Today, all that is left of the tabernacle, which Compton claimed would be standing long after he “…passed on to the silent land,” are the crumbling concrete columns that once supported its unique trussed-beam roof, now nearly covered in heavy undergrowth.

Just up the road from there, on top of Dryman mountain where the Conference Inn used to stand, sits the Crest Center and Pavilion, one of Western North Carolina’s premiere conference and wedding destinations. Both sites still enjoy the breathtaking views of Asheville, and beyond to Sunset and Craggy Mountains.

And at the base of the former Civil War battlement once called Battery Park, that small triangle of land continues to host the ever increasing bustle of work-week traffic, the pulsing rhythms of a Friday night drum circle, and the occasional Sunday morning supplications of a spontaneous congregation.

At the western corner of the park sits the “Deco Gecko,” a whimsical sculpture that reflects Asheville’s singular spirit in the 21st century. Surely, Lucius Bunyan Compton stood on that very corner over a century ago, preaching to the crowd, seeking to help those he called “The last, the lost, and the least.” And in their unique way, the people who live in this vibrant community deep in the heart of Southern Appalachia continue to maintain the spiritual traditions of an earlier generation, one that briefly claimed a foothold on a mountain plateau high above the city. 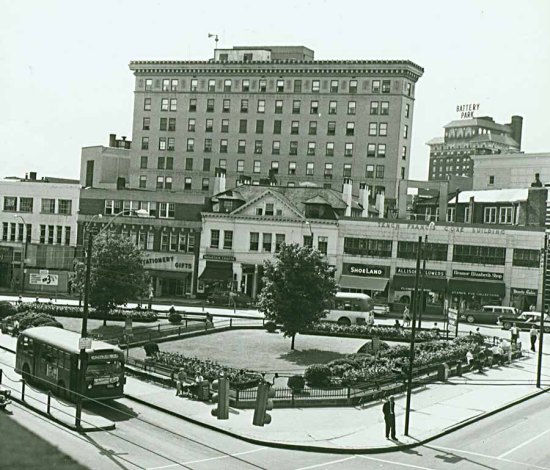 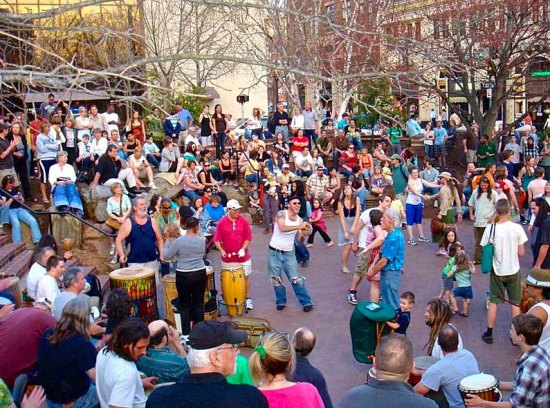 13 Responses to “From the Bricks of Ben Lippen to the Friday Night Drums” – The Evolution of Pritchard Park in Asheville, North Carolina – by Clifford B. Davids