“Sojourner Truth, The Granite State, and the Cooper Shop Volunteer Refreshment Saloon” – as told from Inside Camp Gilmore in Concord, New Hampshire 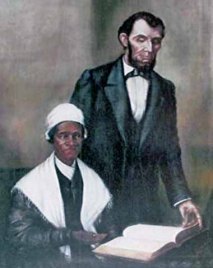 By the time John H. Mathews left Point Lookout Prison in St. Mary’s County, Maryland, most of the remaining Confederate prisoners had been shipped out and sent home. The war was over, but Mathews had not yet mustered out of the Veteran Reserve Corps. Company “B” had been given orders to go to Camp Gilmore in Concord, New Hampshire. The final months of his military service would take him deep into rocky New England, a part of the country he had never seen before. It would become his last posting as a soldier during the Civil War. END_OF_DOCUMENT_TOKEN_TO_BE_REPLACED

“The Assassination of Abraham Lincoln and the search for John Wilkes Booth” – as written by Provost Guard John H. Mathews from inside Point Lookout Prison, Maryland 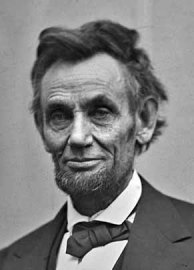 John H. Mathews enlisted in the 77th Illinois Infantry Regiment when the Civil War began, and he fought in numerous battles during the bloody Vicksburg Campaign. He was grievously wounded on May 22, 1863 during the second major assault at the Siege of Vicksburg, but he survived. Following his recovery, he transferred to the Veteran Reserve Corps, a unit of partially disabled soldiers who performed light military duty. By July of 1864 he had been assigned to the infamous Point Lookout Prison in St. Mary’s County, Maryland, where he served as a provost guard through the conclusion of the war in April of 1865. END_OF_DOCUMENT_TOKEN_TO_BE_REPLACED

“Boojum (The Bigfoot of N.C.) and the Eagle’s Nest Hotel” – a retelling by Clifford B. Davids 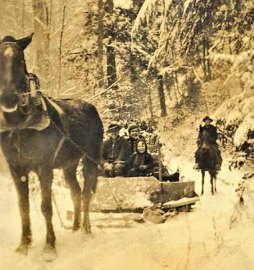 A winter sleigh ride for the hotel guests

Eagle’s Nest Mountain towers at the southern edge of the Balsam Mountain Range, and was once home to the ill-fated Eagle’s Nest Hotel, built in 1900 by an eccentric developer from Waynesville, N.C. After the grand opening, the guests discovered that it was haunted by a strange creature, a woolly brute who could be heard late at night wandering beneath the hotel, smacking its lips and making vile noises. The old timers said the thing was as ancient as the hills, but the hotel patrons demanded that the owner do something about it – but what to do? END_OF_DOCUMENT_TOKEN_TO_BE_REPLACED

“The Re-Election of Abraham Lincoln: From Horace Greeley to the King of the Copperheads” – as written in the Civil War letters of Mary Brown and W.B. Mathews 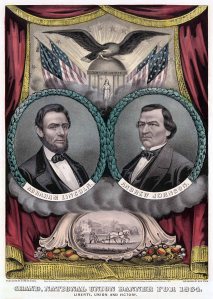 The presidential election was just a few short months away in July of 1864, but Abraham Lincoln’s return to the White House was still far from certain. The final outcome of the war remained in doubt, and many of the Radical Northern Democrats felt that if they could finally drive “Old Abe” from Washington, there would be a reconciliation with the South, a welcome return to the Union as it was, and a quick resolution to the widely detested Civil War.

No organization represented this opinion more vigorously then the “Copperheads,” an association of Unionists who vehemently opposed the war as well as the compulsory military draft and the abolition of slavery – they called for an immediate cessation of hostilities with the Confederate States of America. Their opponents named them after the venemous rock dwelling snake, but the Copperheads turned their moniker into a sly tribute to the image of Lady Liberty found on the copper penny, which they cut out as a pin and wore defiantly on their clothing. It was a movement rooted in the region just north of the Ohio River, and their leader was attorney Clement Vallandigham, a retired newspaper editor from Ohio and a former member of the U. S. House of Representatives. END_OF_DOCUMENT_TOKEN_TO_BE_REPLACED

“The Siege of Petersburg, the Overland Campaign, and the Pleasures of Washington, D.C.” – as told from Inside Soldier’s Rest, Alexandria, VA 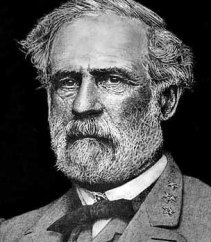 By 1864, the United States had been ravaged by three years of catastrophic civil war. In March of that year, President Abraham Lincoln appointed Ulysses S. Grant as his overall commanding general, convinced he had finally found a military leader willing and able to crush the struggling Confederacy. Grant took immediate control and began to consolidate his power and authority. The shrewd general considered the president’s mandate to be unmistakable – he was meant to completely crush the enemy through a multiple series of coordinated offensives, bringing a final end to the detested war. END_OF_DOCUMENT_TOKEN_TO_BE_REPLACED

“The Disorder on the Border” – Letters Home from Inside the Military Hospital at Jefferson Barrracks, St. Louis, Missouri 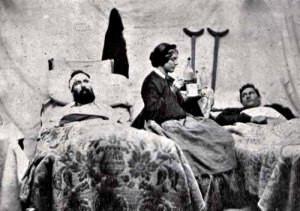 Nurse Ann Belle at work in a Union Hospital

John H. Mathews was slow to recover from the grievous wounds he received during the second assault at the Siege of Vicksburg on May 22, 1863. By the middle of November he had finally been transferred from the Jackson Hospital in Memphis, Tennessee to the military hospital located on the grounds of the historic Jefferson Barracks, located ten miles south of that strategically vital river city of St. Louis, Missouri.
END_OF_DOCUMENT_TOKEN_TO_BE_REPLACED

“From the Battle of Chickamauga to the Carnage at Kennesaw Mountain” – The Untold Tale of William M. Perry 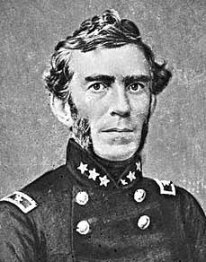 By the summer of 1863, the South had lost control of Memphis, Nashville, and New Orleans, three of its most strategic cities. On July 4th, General Ulysses S. Grant and the Army of the Tennessee would finally prevail at The Siege of Vicksburg and gain dominance over the Mississippi River. After 2 1/2 years of bloody battle, the direction of the war was beginning to turn decisively in the Union’s favor.

And so at long last, Gen. Grant was able to turn his attention to opening a route to Atlanta and driving a stake through the heart of Dixie. After their great victory during the Tullahoma Campaign, The Army of the Cumberland, led by Major General William S. Rosencrans, began to advance towards Chattanooga, Tennessee – a vitally important manufacturing/supply center and logistical hub for the struggling Confederacy. The Second Battle of Chattanooga was fought on August 21, 1863, and was a huge strategic success for the North. Rosencrans outmaneuvered Confederate General Braxton Bragg and forced him to abandon the city and withdraw his Army of Tennessee back into North Georgia. Although Rosencrans continued his pursuit, Bragg was determined to return and reoccupy Chattanooga. END_OF_DOCUMENT_TOKEN_TO_BE_REPLACED

“The Battle of Vicksburg, the Gunboats of the Mississippi, and the Knights of the Golden Circle” – as written in the Civil War letters of Thomas C. Mathews 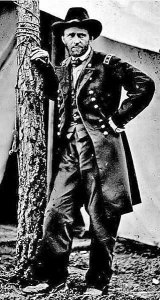 Many of the most decisive battles of the Civil War were  fought in the territory west of the Appalachian Mountains and east of the Mississippi River – a section of the country known during the war as the “Western Theater.” And the military commander who enjoyed the greatest success there was none other than Maj. General Ulysses S. Grant.

He is widely considered to be one of the greatest military strategists of his generation. Appointed a brigadier general at 39 years old, the West Point graduate was promoted to major general before he turned 40. President Abraham Lincoln considered him a decisive commander, and Maj. Gen. William T. Sherman stated, “He dismisses all possibility of defeat. He believes in himself and in victory. If his plans go wrong, he is never disconcerted but promptly devises a new one and is sure to win in the end.” END_OF_DOCUMENT_TOKEN_TO_BE_REPLACED

“The Siege of Vicksburg, the Guns of Memphis, and the Healing Power of Sassafras Tea” – the Civil War letters of John Mathews 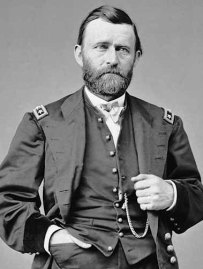 The Union triumph at The Siege of Vicksburg on July 4, 1863 is widely considered to be a significant turning point in the Civil War. The ultimate capture of that highly strategic town, located on a bluff above the Mississippi River, crippled the struggling Confederacy and opened up the river as a continuous and largely uninterrupted supply route for the Union forces. President Abraham Lincoln famously declared, “Vicksburg is the key – the war can never be brought to a close until that key is in our pocket.”

Starting in December of 1862, Major General Ulysses S. Grant engaged in a series of unsuccessful military operations which attempted to capture the heavily fortified city, famously known as “The Gibraltar of the Confederacy.” After isolating the Confederate Army inside Vicksburg with a force in excess of 75,000 Union soldiers, and with Maj. Gen. William T. Sherman and his troops guaranteeing a safe supply line and sufficient reinforcements from the north, he began the final push in May of 1863. The first assault began on May 19th, and was repulsed with heavy Union casualties. The second assault on May 22nd fared no better. Grant became convinced that Vicksburg could only be taken after an all-out siege. END_OF_DOCUMENT_TOKEN_TO_BE_REPLACED

“The Battle of Bloody Ridge and the Lost Confederate Gold” – a retelling by Clifford B. Davids 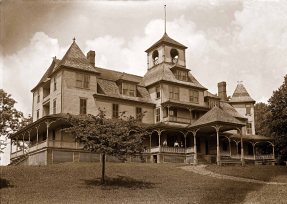 The White Sulphur Springs Hotel was the last “Grand Dame” of Appalachia. Located in the Great Balsam Mountain Range, her breathtaking vistas and cool breezes were a soulful tonic. Her lavish rooms were a playground for the upper crust. It was a private haven where the wealthy could unleash their high altitude dramas and render their wickedly drunken feasts. But she was also a neighbor to the most cursed site in the entire Balsams. END_OF_DOCUMENT_TOKEN_TO_BE_REPLACED

“The Spirit Fiddler’s Ghostly Dancers and the Hotel Gordon” – a retelling by Clifford B. Davids 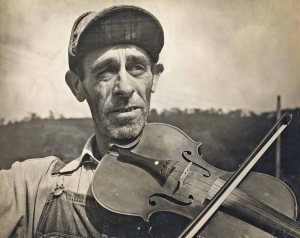 When the Spirit Fiddler picked up his worn wooden instrument he could make it whisper to you like a long lost friend, seduce you like an exciting new lover, or thrill you like the perfect dance partner. In his scarred and calloused hands the old fiddle moaned and wailed, it beckoned you, it laughed with you – it filled your heart. And if your mood was blue, it wept a river of tears right alongside you. END_OF_DOCUMENT_TOKEN_TO_BE_REPLACED

“Lost Boys of the Haunted Orphanage” – by Clifford B. Davids 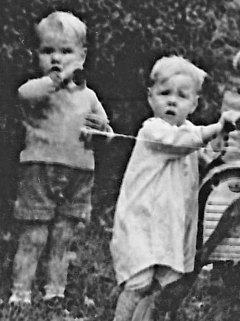 I have traveled across the American South for a decade and more, constantly searching for the most interesting and compelling stories to tell. Some years ago I became personally involved in a remarkable project – uncovering the fascinating tale of a long forgotten orphanage located deep in the mountains of Western North Carolina.

I was fortunate enough to interview some of the children who had grown up there, and I spent countless hours listening to their many stories. Late one night, two of us decided to sneak into the abandoned Main Orphanage Building to look for a souvenir. There wasn’t much left after the long years of neglect, but I was surprised to find some old photos tucked inside an of old White Owl cigar box hidden underneath the front stairs. END_OF_DOCUMENT_TOKEN_TO_BE_REPLACED

“Ghost Train of The Mighty Balsams” – by Clifford B. Davids 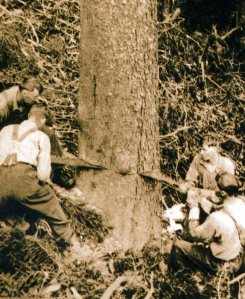 The quiet, peaceful waters of Lake Logan, N.C., provide a welcome respite for the discerning visitor in a remote mountain setting. Located in the heart of the Mighty Balsams and surrounded by thousands of acres of pristine wilderness, this majestic wildlife sanctuary calls itself home to a bounty of ducks, geese, heron, and more.

You might choose to rent a log cabin on the edge of the lake and spend your days lazily fishing. Looking for something more exciting? You can try a variety of outdoor adventures from hiking to biking to kayaking. Afterwards, take a dip in the clear, refreshing mountain waters. It can be the perfect escape – but beware! END_OF_DOCUMENT_TOKEN_TO_BE_REPLACED